OPERATOR'S SHARE ON THE RUSSIAN MARKET
OF SATELLITE COMMUNICATIONS 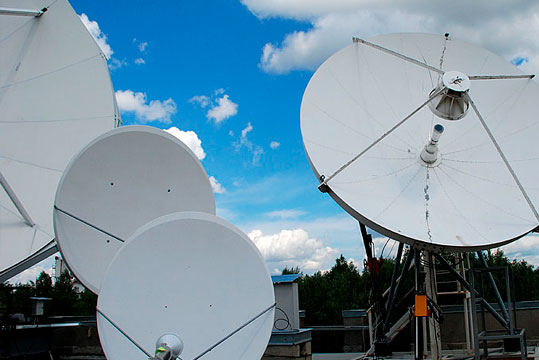 "Hot" standby. Due to the use of "hot standby" of the equipment, continuous operation of the DCC is guaranteed.

Satellite redundancy. Use of satellites with overlapping by service areas. If one satellite fails, the VSAT can be transferred to another satellite.

HUB-dependent
Hughes Network Systems
ST Engineering iDirect (Evolution / Velocity)
Hubless. SCPC
SCPC (Single Channel per Carrier)
SCPC (Single Channel per Carrier) is a classic satellite communication technology.
Compliance with the leading industry standard DVB-S2 & DVB-S2X.
It is intended for communication of two earth stations in the topology of "point-to-point". The "exclusive" frequency bands are used only by attached earth stations and can not be used by others.
Organization of backbone channels with a throughput of download/upload up to 360/360 Mbit/s.
The technology C-in-C (mode carrier in the carrier) is applied.
Hot redundancy of VSAT equipment.
At the request of the customer it is possible to implement the options: